People often tell me that they love the way I speak about plants and the landscape on my website.  I definitely do express a unique perspective on non-human species and other organic elements of this beautiful, magical planet.  In this post, I will list perennial plants that provide multiple ecosystem services* to us and focus on the mystical side of the plant world, which I have worked with in my professional ecological landscape design business for the last 15 years.

I fell in love with Nature** as a child.  I lived on a houseboat in Sausalito, and back then it was okay to wander for literally hours through the shipyards by myself.  Generation X understands this.  It was on those long, unsupervised walks that I discovered near-blinding pockets of magic.  I would remember them for life.  One was a tall stand of Anise (Pimpinella anisum) which had been colonized by a group of Ladybugs.  The sun was shining on their brilliant red shells, popping them against the vibrant green stems.  I stood surrounded by the wonderful scent of the plant and pinched several small lace clumps to savor the flavor, being careful not to scoop up any Ladybugs on accident.

If the Universe is vibration, everything is waves. While walking the other day in a part of my neighborhood that I hadn’t explored before, I happened upon a home for sale next door to a raw construction site.  Read More

A Buddhist monk once said something like, “There is so much to do

and so little time to do it, we must take great care not to move too quickly.”  A great dishwasher I used to know once said, “There are so many dishes here before us, and lunchtime is approaching; thus, we must employ great speed.” 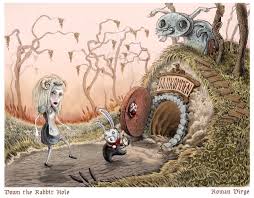 Organizing computer files and bookmarks is like going down the rabbit hole of the Internet.Read More

I visited the cemetery on Crystal Lake Drive on a weekday in June of 1999.  I was enrolled in an experimental university course called The Philosophy of Death and Dying, and this was an assignment.  It was sunny, with white clouds filling niches in a wide summer-blue sky, and I managed to miss the torrent that came about five minutes after I left. It was Oregon, after all, where one can never rely on consistent weather.  I’d never visited a cemetery before with the intent to record impressions. I’d also never experienced the weird sensations that came on that day under my feet.

I arrived and walked to the river, a space in the trees signifying its presence. I sort of naturally made this my beginning and ending point for this walk. I took note of the clumps of water plants clogging the river’s surface, an old rowboat tied to the bank, still above the water’s edge, wind in the trees, thick grass, and a strong wish suddenly to stay there beside the slow-moving water. Wild poppies and chamomile flowers crowded in at my feet.
Behind me, the cemetery was divided into two kinds of sections. The farthest away was for raised stones, and the first section I walked through was for ground-level stones. Flags from Memorial Day waved from almost every grave, creating an illusion of life through movement. Other movement in the yard was created by a Blue Jay hopping in the grass
to eat worms and insects, then landing on a grave stone, and a Gray Squirrel loping like a sail from one large tree to another at my approach. There were all types of trees of different sizes. I speculated during my walk on whether this sense of life in the graveyard was due to the life of the wind made visible by flags, the awareness of the dead themselves, or the leftover intentions of those who inserted the flags.

Store-bought bouquets dotted almost every grave. Stones had depressions under them and were old, weathered, rainstained,
cracked, and lopsided. I took a straight diagonal. Starting out into the empty lawn, I had my usual air of bohemian flippancy. Soon a reticence touched down on me, like one of the white clouds turning to gray and descending to within an arm’s reach. I started not wanting to be there.  The first grave started to change that. A not-so-subtle tingling went up the bottoms of my feet into my calves. I started to see images of the dead bodies, the bones, resting a couple of meters under the ground, sealed off from this shining, wonderfully breezy day. I decided then and there that no one would ever bury me. I want to be scattered over a river and in forests and mountain meadows and such, a little bit of me returned to each variety of
natural space.

As I found myself reading aloud names and dates and such, I noticed my flippancy dissolve, and it became interesting to be there. I read a lot of the tombstones, and I was particularly moved by the graves for folks who died in 1881, 1885, and 1888. It was such a long time ago. I wondered how the stones had gotten to this cemetery, whether the cemetery was that old,
whether the stones were that old. A hundred years is a long time to a human being.

All throughout this walk, the weird and unexpected tingling energy rode up from the ground into my feet. Once when I squatted, the tingling graduated to the seat of my pants. I also kept having a weird sense that there was a consciousness
present over the yard. Somehow the dead seemed to be enjoying this day. I was taken aback by this sensation, because I did not expect to feel anything at all while there. I’ve been to a couple other graveyards and felt nothing at all. This was really, really strange. I spoke the following into a micro cassette recorder and feel like it deserves to be included:
There is a kind of presence, I don’t know, all these stones, like, this solid sort of a – you can’t just run freely through here without noticing that there’s this…feeling – I’m getting a really strong feeling out of the ground.
Just standing there on the surface with the dead under the ground made me sad for their captivity. I noted each time I touched a stone, and after walking for a while, I felt like paying respect to all the graves I walked over. I said a “Thanks” of sorts. Just as I started looking for a baby grave, I found one of a three year old. I sat down in front of it to ponder the enigma of Wilbur’s death. But here is what I recorded:
Good or bad for my spirit, I believe in vibratory influence – vibrations of today and in a cemetery of all the vibration that’s here and all the time and energy that is spent in a certain vibration in this cemetery by the living, plus the presence of the bones of those who have lived – I believe all of that contains vibration and there’s a vibration that’s left here – just from every single thing that’s ever happened here, or every person who’s ever lived who’s been buried here – lot of vibration that’s left over that continues to emanate a presence or an influence upon – a contribution to the world.
Then I closed my eyes at the kid’s grave. It felt funny, like floating, and I didn’t feel still at all, not solid, not in one place. When I started back the way I’d come, I said goodbye to the little kid in the grave as if the stone was conscious. It was funny – I did it unconsciously. I never had a feeling or any ideas for why he might have died. I did walk away with a sense that people had lived to old ages long ago. I thought the modern idea about not taking your stuff with you when you pass on could mean that all these people were left with was bones, pure and simple, no toys. I ended up back at the river, and I took note of two things I hadn’t noted before. Two large dead trees crisscrossed the channel near the boat, and lots of new growth in
grasses and other weeds was occurring up against dead material. My walk among the dead was kind of like that.