Chinese New Year decorated the hearts and minds of  hundreds of revelers last evening in Portland at the annual Threshold celebration in honor of China’s lunisolar new year, January 23, 2012.  This is considered an auspicious year, that of the water dragon.  In the excellent animated film ‘Spirited Away,’ spiritual beings come to an otherworldly spa to cleanse their energy bodies of the gunk of the world.  A white dragon spirit soars in loops after his visit, and the main character wades calf-deep out into a silvery lake to watch.

As I completed the steps of the routine we’d spent months learning and rehearsing, I felt a release of the potential energy that had been building in preparation for this event.  My relief to be able to check one thing off of my (crowded) list of projects was like a table cleared of a recent dinner party.  It seemed the water dragon soared into the emptied pocket in my head then, and my troupe’s super hero poses at the beginning and end of our performance seemed to clearly fit perfectly with the good luck dragon symbol.

In a vital way, each person is being called by sheer obviousness of the imbalance of the current system to step up and embody his and her inner super hero self.  We have allowed capitalism to go farther than makes sense, to the point of holding our very species back from reaching our potential.  For instance, consider where we would be if free energy devices were not held down by companies profiting from dirty, expensive technologies.  It would seem that someone ought to be stepping in about now and telling the children that it’s time to grow up and share.  Who else but We the People to step into this role?

It’s a winning move.  When the internet was very recently threatened with legal censorship, citizens of countries around the world spoke out against such a blatantly criminal maneuver.  We were successful. Our villainous arch nemeses had to take a (surprised) step back, and though they will undoubtedly try again as ‘the bad guy’ always does, super heroes the world over demonstrated their power to shape the direction of humanity’s evolutionary path this month.

2012 opens before us with significant excitement and hope stirring in the global community of awakened natural people working to free basic elements of our living support system, Earth, from the clutches of confused elitists.  How many reports do we need to see stating plainly that we have a decade or three before turning things around is no longer an option before each of us decides it is time to do something?  I think we’ve all seen enough reports.  We know in our deepest selves it is time to act.

In support of the water dragon of 2012, and mirroring the poses my dance performance troupe took to open and close our guiding of the dragon through the crowd last night, I would like to invoke readers’ inner super heroes.  This year, how can you stand in your power, voice your truth, share your gifts, make a difference in the world, and generally be the person you know you are, deep within? 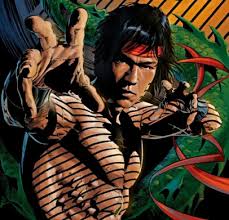